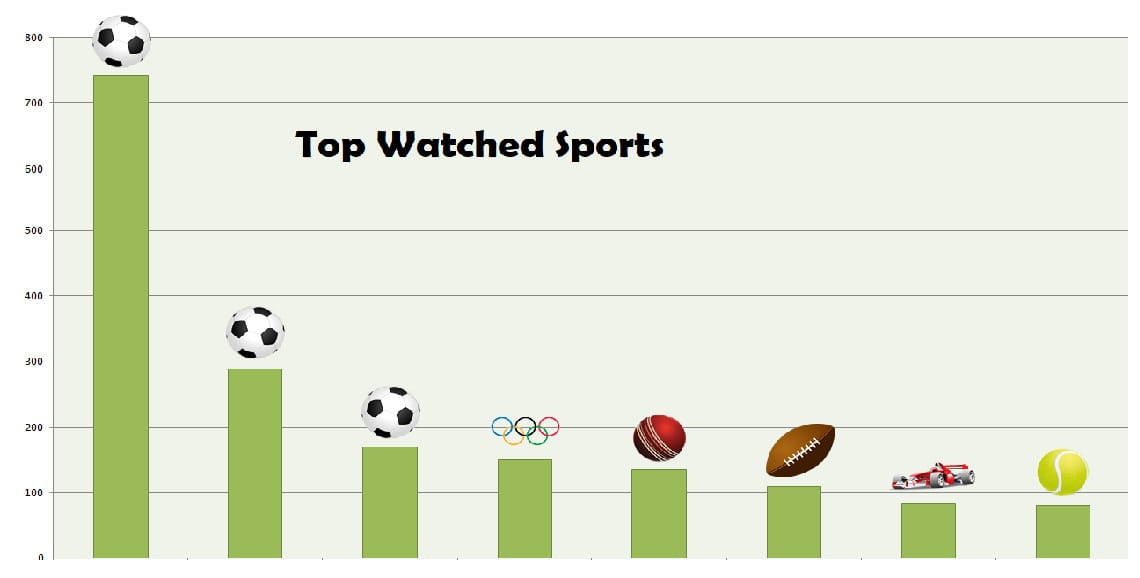 The popularity of sports nowadays in the world is growing day by day. With roughly 7 billion people all over the world, it’s very difficult to map which best and Popular Sport – for example, Cricket is one of the most-watched sports in India, Bangladesh, Afghanistan. Soccer is famous in Brazil and this game having 3.5 billions Fans from all over the World. Lets Check 10 Most Watched Sports in the World.

Basketball is the popular sport in the world and played between two teams, every team has five players. This Sport having 400m viewers from the world different countries. First-time Basketball played on December 21, 1891; 127 years ago in Springfield, Massachusetts, U.S and now known one of the famous sport.

Golf is the richest sport for world top celebrities and rich peoples. Around 450m people watching this game from the world’s different areas.

This is a bat-and-ball game pled between two opposing teams. Each team has 9 members. Baseball bat, glove and Bases are the Equipment of Baseball. First played these sports played in 18th-century in England. Currently, Baseball having 500m fans and viewers from all around the World.

Table tennis the popular male and female game is also known as ping-pong in which two or four players hit a lightweight ball back. This is a very interesting and easy sport first time played in the 1880s in Victorian England. Currently, this game having 850m fans and viewers from the whole world.

Volleyball is a popular and most watched team sport in which two teams of six players are separated by a net or Boundry. Each team tries to score high points than another team. First Time Volleyball played in 1895, in Holyoke, USA. Currently, Volleyball having 900m around fans from the world.

Tennis is a racket Popular and most Watched sport that can be played individually, against a single player or between two teams. Each team has two players. First Time Tennis played between 1859 and 1865, in Birmingham, England. Now Tennis is the most popular sport in the list of Top 10 Most Watched Sports in the World. Tennis has 1bn Fans in the world.

Field hockey is a popular and most watched team game. This game can be played on green grass, water turf, and artificial turf. Each Hockey team has eleven players including the goalie. the game The first time played in the 19th century in England. Now Field hockey has 2.2bn fans in the World.

Cricket is the World’s 2nd most popular and most watched sport. This Sport played between two teams and each team has 11 players. The sport played in small and big cities in every country. First-time Cricket played in Kent in 1646 and now known 2nd most-watched sport with 2.5bn fans.

Soccer is the World First Popular and most-watched Sport. We can say that Soccer is the king of all sports. The Sport played between two teams and each team has eleven players. Equipment of soccer is Football (or soccer ball). First-time Soccer played in China in the 3rd and 2nd centuries. Currently, Soccer has 3.5 bn Fans and Viewers from all around the World.