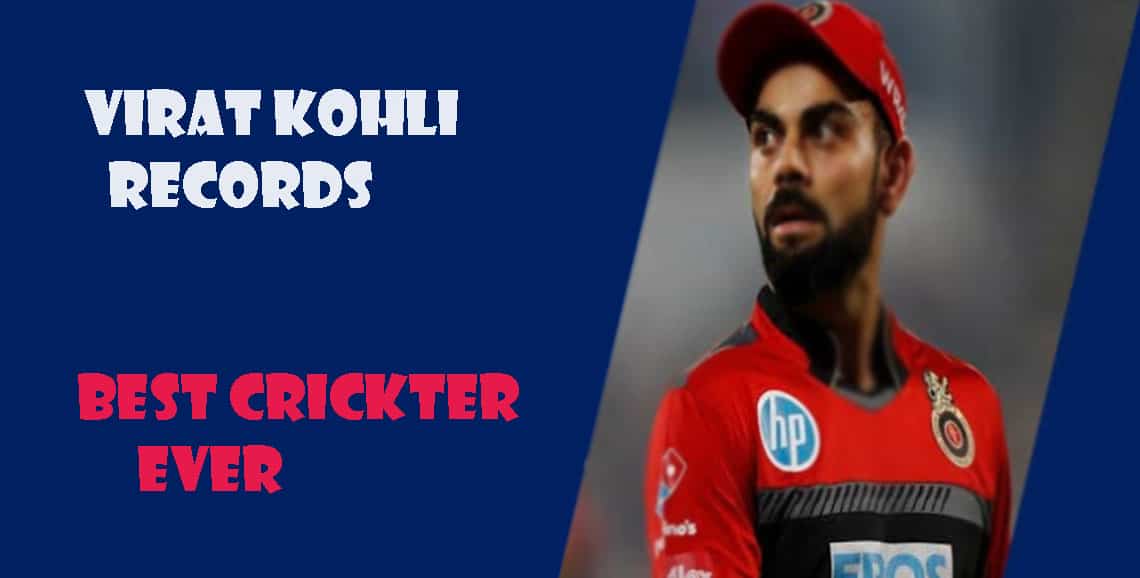 Virat Kohli is one of the famous cricketers with the most records and also an Indian international team captain. He was Born on November 5, 1988, in Delhi, India, and currently leading the Indian National team. Professional cricketer Kholi is famous as a star of cricket and knows the best batsman of history. Million of people following Virat Kohli because of his best performance. Kohli is the first player and Captain in the India Cricket team with the most records. He makes different Records in ODI, Test, and T20 Cricket Series. Che Virat Kohli Records Details in the Table.

If someone asks who is the best batsman in the world, then more than half of the people will answer that Virat Kohli is the best. This is because of his consistency as a batsman. If we look at Virat Kohli’s career records we find that the player has many incredible records to his name and he is one of the most prolific batsmen that India has ever produced. Kohli was a part of the ICC Champions Trophy in June 2013. India won the Champions trophy and Kohli played a key role. First, he scored a century against Sri Lanka in a warm-up match. Profile.

In the semi-final of the same Champion Trophy, Kohli scored a half-century and helped India win the match. He remained not out in that innings. After that India faced England in Birmingham in the final of the Champions Trophy. The rain affected the match and it was reduced to 20 overs. Once again Kohli shined and scored 43 runs off only 34 balls. This innings of Virat Kohli helped India win the Champion trophy. Virat Kohli’s career records are not just limited to this Champions trophy. In fact, the player played even better after this tournament and play many more important innings for his country.

Kohli is only 28 years of age and is in the middle of his career. If everything goes right for him, the player can very well go on to play until the age of 35. Many batsmen these days play until this age, provided that they are able to maintain their fitness. As Kohli is quite slim and is a hard-working individual, it would not be hard for him to maintain his fitness and to keep conquering the cricket grounds until the age of 35. So the Virat Kohli fans can brace themselves to seeing many more exciting innings of this magnificent batsman. Hopefully, Kohli will not disappoint his fans and we will see many more Virat Kohli career records being made by the player in the coming years. Visit More best Cricketers.

1) Virat Kohli has scored over 300 runs in a bilateral ODI series on six different occasions.

2) Virat Kohli was involved in four double-century stands, the most by any pair in ODI history.

4)On 11 December 2016, the India skipper became the only batsman in history to have an average of over 50 in all three formats of the game when his Test average nudged past 50 against England in Mumbai.

8) Virat is the fastest cricketer to reach the landmark of 1000 runs in the T20 internationals.

9) Virat has the most number of centuries (21) while chasing.

10) The India first captain became the only Test skipper in all history to score three hundred in his first three innings as captain.

13) No Indian player has scored more runs in a T20I chase than Virat Kohli.

14) Virat Kohli is the quickest to score 20 hundred as captain across all formats, in 93 innings.

15) Virat Kohli has the most number of hundreds during chases in ODIs (21).

19) Virat Kohli scored his sixth double hundred as a team captain, the most by any captain.

23) The 29-year-old cricketer Kohli has been involved in eleven 200-runs partnerships in ODIs.

25) Virat Kohli broke the world cricket record for playing the most innings before recording a duck in T20Is.

All of Virat Kohli’s Records and Career Information are shredded according to the Virat Kohli Performance. If you have any QUOTES  about Virat Kohli records then join us in in comments below.