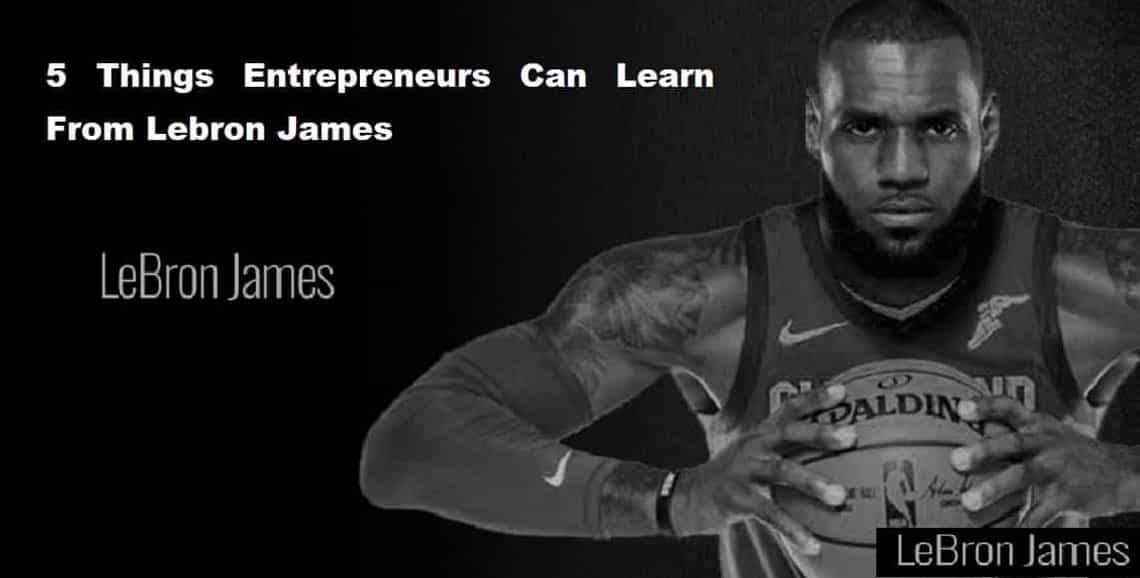 The basketball career of Lebron James has had quite an impact on his wealth. On one hand he has earned huge amounts of wealth directly from basketball and on the other hand, his attitude as a player has helped him succeed as an entrepreneur. We have compiled a list of 5 things entrepreneurs can learn from Lebron James.

Today Lebron James is one of the most popular names in the world. The Lebron James net worth is in hundreds of millions of dollars. And he has a number of side businesses. However, one thing that he has become synonymous with is basketball. Despite being highly talented, he worked really hard in developing and mastering different skills. For example, he was not that good at a jump shot. So he worked hard and developed a perfect jump shot. Now, he has one of the best jump shots in the game.

The entrepreneurs should aim for perfection. They should try to be masters of their trades. Although it might not be possible realistically by continuously improving and overcoming flaws, one can become the master of any trade.

2 – Learn to Market Yourself

Marketing yourself and your company the right way is very important. Lebron James is considered one of the most marketable athletes in the world. And this has played a huge part in bringing the Lebron James net worth to the level that it is today. It is important for business owners to learn the people skills, and to learn the basics of marketing. They should be able to give a positive outlook of themselves and their businesses to the potential investors, community, and above all the customers.

One thing that Lebron James does really well is that he adapts to the situation of the game. This benefits his team and makes a huge difference in the outcome. The entrepreneurs should know when to step up and be aggressive and when to take things slowly. They should be able to adapt to different market conditions, customer behaviors, and technology advancements.

It is often that we see Lebron James, yelling at his teammates in an effort to spark them up. He understands the importance of his teammates and instead of acting like a one-man show; he relies on his team to win. The player is known for delivering high-quality passes that result in his teammates scoring crucial points. Similarly, business owners should realize that no matter how good they are, they need their employees in order to succeed in the long run. They should try to improve the skills of their employees and let them take responsibility.

Lebron James is not the best basketball player in the world because he is talented. There are many other highly talented players in the NBA. James is the best because he is very consistent. His team can rely on him during every match. There is hardly a day when he doesn’t perform up to the expectations. Consistency is the key. And in order to perform consistently, Lebron James works really hard.

The entrepreneurs should learn the important lesson of consistency from Lebron James. They should not get carried away with success, nor should they lose hope after failure. If they are consistent, they will get success continuously. It might not come straight away. And it might require some refining of the skills or processes. But if they continuously work towards a goal, they will be successful.

Just taking a look at the Lebron James net worth at the young age of 32 will make you consider adopting these habits. So you can achieve your goals and become highly successful as an entrepreneur.